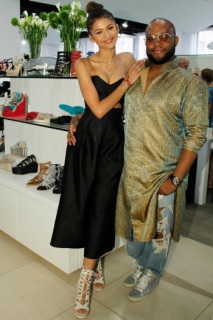 endayas stylist Law Roach knows to keep the of title fashion icon, a line of some sort is in order. So, the addition of designer was added to her ever changing resume. Together the duo chose the one thing that women of any age and body type are drawn to: a line shoes call Daya by Zendaya. As with everything she does, this collection is personal to her; she even named it after her childhood nickname. Keeping her fans and the everyday women foremost in her mind, she created a line of fashionable yet comfortable shoes. The sky high-heels, fringed flats, shimmery sandals and sporty wedge sneakers, priced from $125-$175, come in a range of colors; olive green, wine, blush, blues, bronze, pewter, silver and burgundy. In order to get it right, Zendaya would spend time asking her niece and older sister what they would sped, how do they find stuff and what are they looking for. The result is her new line, which debuted in spring of 2016 and is available at Nordstrom. Her spring 2017 collection will show at Fashion Footwear Association of New York and will include gladiator inspired styles, interesting prints and cut-out booties.

From singing to dancing, acting to producing and now designing, Zendaya has several outlets to display her creativity. One such outlet shines bright on the red carpet and shockingly, its not her chic and impeccable sense of style. Its an ability that sets her apart from all other celebrities; Zendaya does her own make-up for all events, including red carpet. She decided to take matters into her own hands after a few too many missteps with other people at the helm. As she would put it, she knows her face best. So, after having taught herself through YouTube tutorials and hours in a make-chair, she is now the flawless style pro we see hitting the red carpet. Nudes are her signature lip shade, which can then be mixed with any color. She prefers highlighter to bronzer or blush, it adds a glow all the while making one look like she is without make-up. Her must haves include, a pen eyeliner and a shimmer powder like Urban Decays Naked Illuminating Shimmer powder for Face and Body. Zendaya has commented on more than one occasion that she purchases drugstore products because according to her they are just as good as expensive ones. It is no wonder she became the newest face of CoverGirl earlier in 2016.

Thanks to her new role as designer, Zendaya was picked as the official PSA spokesperson for QVC Presents FFANY Shoes on Sale, a program that donates a minimum of 80% of the purchase price to breast cancer research and education. This is not her first foray into social awareness and working with charities. Since 2012 Zendaya has been an advocate for Convoy of Hope and even spent her 18th birthday supporting their feed ONE initiative. She has also performed spokesperson and ambassador duties for UNICEF and the Childrens Miracle Network respectively and has worked with the Make-A-Wish and Keep A Child Alive foundations. 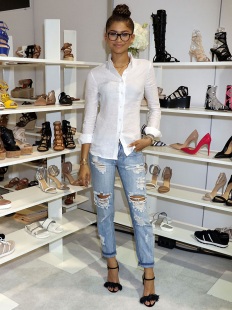  Zendaya means to give thanks in Shona, a Bantu language native to Zimbabwe.

 She won the 2014 BMI Social Star Award, the Radio Disney Music Awards Youve Got Swag!  Artist with the best Style Award and the Choice Style Icon Award at the Teen Choice Awards

 Her music video for "Replay" has over 99 million views.

 Played Basketball for many years and thought shed be a basketball player not an actress.

My girls at Prom...fashion for them is key, so they love to look at the closets on MyCloset.com

I've updated My Look Books Check it out!

I've updated My Closet. Check it out!