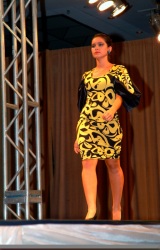 While in school. Loreal has received two awards. Her first major fashion award was achieved when she entered a student competition for "The 10th annual Miami Fashion Week 2008" and was chosen as a finalist to showcase during the event on April 9, 2008. Surprisingly, Loreal won the competition and was named Miami Fashion Week 2008 South Florida's Top Student Designer. After receiving this award, she was not expecting to win another. On May 2, 2008, Loreal debuted her first full collection, 'Hue Expressions' at the American Intercontinental University's 5th annual school of design show. Hue Expressions was based on bringing color to life. At the end of the night, Loreal was awarded best of show. Loreal said, "she would not have achieved these awards if it wasn't for God, Her Family, Her Reverend, Professors, and the inspiration from her favorite designer Tracy Reese". Tracy Reese has encouraged her to think outside the box and inspired her to embrace femininity.

What has been your biggest fashion faux-pas?
Wearing pants that are the wrong length.
If you could only shop at one store, which would it be?
I would shop at Macy's. Macy's has everything from shoes, handbags, apparel and more.

If you could change one thing about your closet, what would it be?
Add color!!! My closet is boring. It is full of black and white.
Survival of the fittest: What is one item in your closet that you will never get rid of?
I would never get rid my wide leg jeans. They never go out of style.
If you were given the opportunity to have a famous designer revamp your entire wardrobe, who would you choose?
Tracy Reese.
Name an actor/singer/celebrity whose wardrobe you admire the most.
Kerry Washington.
Who makes your favorite pair of jeans? Shoes? Dress or Suit?
Seven Jeans, Nine West shoes, and I make my favorite dress.

Guys. Anybody home?
Can I contact with admin for a specific question? I got a problem with your website