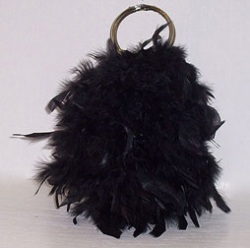 What influenced Tracey to make things for herself was mainly finances. I have always made my own creations and versions of what I saw in magazines. I grew up in a small town and must have been pretty entertaining to some folks. Her first design goes way back to Junior High school which was an oversized feather tote, which has been dubbed, the show stopper. It was inspired by feather boas she would see hanging in downtown Los Angeles which she thought were so pretty but realized that most people dont get many opportunities to wear them unless you were a Vegas show girl. She admits she went for everyday glamour and always wore favorite pieces that stood out. She remembers having a thing for patent leather even when she was around 5 or 6 years old and she still does.

Tracey got her real push while she was unemployed. She had received several compliments on her handbag and figured, what the heck? She is grateful for that fear. She sent some bags to a few magazines and ended up getting a feature in Essence Magazine.  I started my web site while unemployed and between day jobs. Looking back, that difficult time and others have been blessings in disguise. They all gave me the push I needed to dive in without too much thought. My designs are sold in boutiques, events and web sites in several states. Along with retail presence, some of my feather handbags were props on a popular television show and caused several cat fights at auction events. My accessories appeal to the girl of all ages. They look just as fabulous with a cocktail or evening dress as they do with jeans and a t-shirt.
Her designs are now sold in boutiques in Boston, Los Angeles, Alabama and Cincinnati. She has even had sales in Canada, Hawaii and a friend even took a few to Italy. Tracey has also donated to Susan G. Komen Breast Cancer foundation, Lustgarten Pancreatic Cancer, and several groups that help battered women and terminally ill Children Like Me Fine in Raleigh, North Carolina. The hit show, Ugly Betty used her bags as part of the background sets. It was non-paid and no press but an accomplishment, none the less. After living in Los Angeles for over 18 years, Tracey says she would not be surprised if one day her bags appears on the arm of a celebrity fashionista.

What has been your biggest fashion faux-pas?
My preppy moment.
If you could only shop at one store, which would it be?
Target, only because they have everything including food and DIY materials. 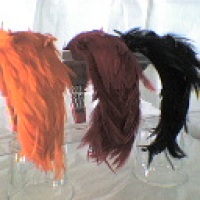 If you could change one thing about your closet, what would it be?
Size-- bigger of course.
Survival of the fittest: What is one item in your closet that you will never get rid of?
My leopard loafers.
If you were given the opportunity to have a famous designer revamp your entire wardrobe, who would you choose?
Miucia Prada
Name an actor/singer/celebrity whose wardrobe you admire the most.
Sarah Jessica Parker
What are your best and worst fashion purchases?
Best- my Jeffrey Campbell Leopard platforms. Worst- dhoti pants

Who makes your favorite pair of jeans? Shoes? Dress or Suit?
Levis jeans forever extra long for cuffing, Jeffrey Campbell Shoes leopard and Banana Republic Floral Dress.
If you had to describe your personal style in one word, what would it be?
Unique
If you could bring back any fashion trend, what would it be?
The trend where ladies always wear a hat, gloves and purse.
If we were to take a peek into your personal closet, what would we find?
That I have duplicates of certain items I would be lost without.

Dressed to impress during the day

I've updated My Closet. Check it out!